Check out this chart from Bloomberg. ETF holdings of gold are surging. As Luzi-Ann Javier at Bloomberg explains:

"The hunger for bullion is so strong that purchases of exchange-traded funds backed by gold last year eclipsed buying by the world’s central banks, the biggest holders of the metal, for the first time since at least 2010. So far in 2017, investors poured $3.1 billion into the ETFs backed by precious metals, after a record inflow of $23 billion last year." 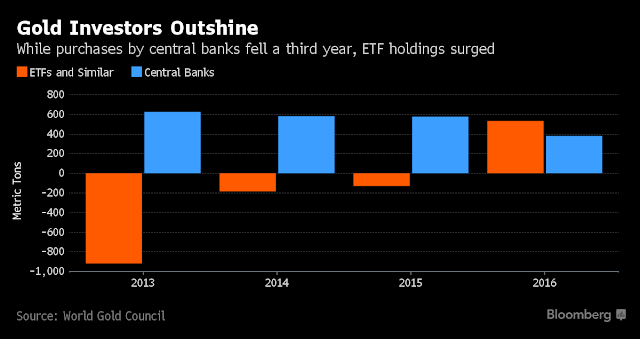 Let me make a point I've hammered home before: ETF buying is the supercharger of the gold market. It makes rallies soar, and makes corrections swoon lower. Now, it looks like the Bulls are lining up to buy gold in ETFs.

There are two good reasons for it.

The first  is Trump. The President is a wild card for world markets. He is making investors nervous with his tax of border taxes and currency wars.

The other one is that foreign currencies -- the euro, the yen and the pound -- have declined against the U.S. dollar in recent months. So, investors overseas are trying to protect their wealth. One of the best ways to do that, at least in this environment, is to own gold.

Posted by Sean Brodrick at 9:51 AM