Plenty! In fact, there are two crises that could rear their ugly heads in the very short term. And both could be price drivers for gold.

The Ides of March

First, on March 15 -- the Ides of March -- America hits the debt ceiling negotiated by President Obama and then-Speaker of the House John Boehner. That's $15 trillion.

The last time, two adversarial sides negotiated a deal after much kicking and screaming. This time around, Wall Street expects the debt ceiling to just be a speed bump. The Republicans are on Trump's side, they'll raise the debt ceiling, and Trump can go on to spend more on infrastructure and military, while slashing taxes and health care.

But what if Congress doesn't play along so meekly? There are some particularly stubborn parts of the Republican Congress that may not roll over so easily.

I do expect Trump to win that battle eventually, but I could be wrong. In any case, the brouhaha could shake the markets and whip gold around.

What happened last time? Well, let's set the stage. It was March 2013. Gold was in the depths of a bear market. The President and the Republican-controlled Congress were at loggerheads. A crisis loomed.  It was called "Sequestration."

Here's a chart showing the action in gold and the U.S. dollar during the crisis. Since they move on vastly different scales, I have used a price scale for the greenback and a performance chart for gold. 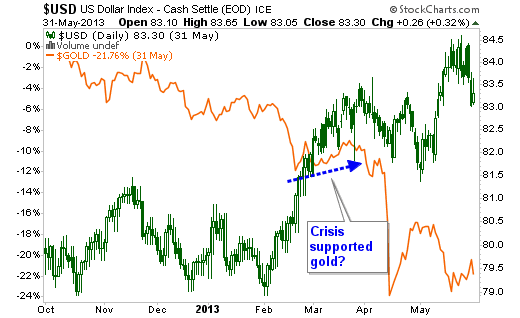 The U.S. dollar ran up into the crisis. As I said, gold was in a bear market. When the dollar really started to ramp, gold fell initially. But then it found support -- and even went higher.

The Sequestration crisis probably had a lot to do with gold's support. After the crisis passed, gold plunged like it jumped off a bridge. The bear market went back into its grind.

Here's a cyclical chart of the Gold Bugs (gold miners) index I showed the folks at the PDAC, as well as the recent Money Show in Orlando.

It shows the cycle in gold miners playing out. These cycles usually run 4 to 5 years. And if you believe Mickey Fulp, up to seven years.

So, will gold act differently in this new budget crisis? I don't know. I do know the odds favor some kind of impact.

The Tides of Politics

Now for the bad news. That's not the really big crisis looming over our heads.

After all, Washington may be overrun with dunderheads, but they'll get through it. No, the big crisis is looming in France. That's where Marie Le Pen is going to win the next Presidential election. Probably on April 23, though there is a second round of voting in May if there isn't a majority winner the first time.

For the same reason I predicted Donald Trump would win. I first predicted his victory last February at a Money Show event. I pounded the table again about a Trump victory in a July column for InvestmentU.com: "Where to Invest Before Trump Takes the White House."

Here's the reason: Voters are feeling stiffed, ignored, and even cheated by the ruling elite. They're in a "throw the bums out" mood. In the U.S., that mood was captured by Trump. In France, it's Le Pen.

And it doesn't matter who you WANT to win. As I say over and over, it's who's most likely to win.

Now, one place I was wrong was in predicting Trump's victory would boost gold. It didn't, at least at first. Gold sold off (because "sell the news," I guess). Gold's rally was delayed but not denied.

Because we're in a new gold bull market.

Le Pen has made noises about leaving or at least shaking up France's relationship with the European Union.

So, her victory will likely send the euro reeling, and boost the U.S. dollar. But it could also boost gold.

And here's something both crises I have mentioned here could do: Give the Fed reason to pause in its rate hikes.

Investors are worried the Fed rate hikes will weigh on precious metals. They have been selling gold and silver ahead of a feared staircase of rate hikes.

What if that view changes?

Mind you, I don't think rate hikes are bad for gold anyway. In an inflationary environment, rate hikes rarely keep up with the real rate of inflation. So, gold goes higher as an inflation hedge.

What now, if the Fed decides to pause? What could happen to gold, silver and miners then?

I say be ready. The tides are shifting in gold's favor. The next wave could be a great ride.

Posted by Sean Brodrick at 6:48 AM